Keep up to date with news and information from Check My Legal Fees
Categories
Tags
Calendar
Font size: + –
Print

We think most users of legal services are either told or allowed to assume that "no win, no fee" agreements offered to them by lawyers, particularly for personal injury work, are pretty much the same  : a "standard" model, adopted industry wide, with little to differentiate one firm from another and no need to shop around on price.

The analysis was undertaken jointly by Checkmylegalfees.com and JG Solicitors Limited, the leading firms dealing with challenges to deductions under "no win, no fee" agreements. Full detail of the analysis is available in downloadable form at the end of this article.

Over the course of several years both firms have undertaken an ongoing analysis of available historic retainers that have been supplied either by clients, or by solicitor opponents in the course of claims . There has been no "selection" in that the data includes claims that - in terms of challenges against deductions of legal fees -  have ended up being won, lost, are still ongoing, or have not been pursued at all. It includes retainers that give clients very little information, and some that provide full and detailed information about both how the solicitors charge, as well as how costs are recovered from the opponent in the event of a win so that the client has a good idea what the net cost of proceeding with a claim or dispute is likely to be.

97% of "no win, no fee" agreements within the analysis are a formal "Conditional Fee Agreement" but beyond that there are some fundamental differences :

Why does any of this matter if it is "no win, no fee"?

There are two very important reasons why this matters.

Firstly the outcome of a claim dealt with under a "no win, no fee" agreement is not binary. If the claim "wins" the other side usually pays part or all of a client's costs (except for the success fee) and if the claim "loses" then there is no fee payable to the solicitors. But what about where a client changes their mind after the cooling off period? Or rejects an offer that the solicitor thinks they should accept? Or wants to instruct a different solicitor, becomes insolvent or even dies during the course of a claim. Or where the solicitor accuses the client of being in breach of the agreement. In those circumstances virtually all  "no win, no fee" agreements require the client, or their estate, to pay the costs (excluding the success fee) there and then. So the hourly rate in a Conditional Fee Agreement can have a drastic and unexpected impact if things do not go to plan.

There are plenty of real world examples of cases that "did not go to plan" :  An ordinary family faced with a bill for more than £17,000 following a holiday sickness claim conducted on a "no win, no fee" agreement when the solicitors assumed - quite wrongly - that the clients had not been truthful. Or a businessman faced with a bill of more than £16,000 on a professional negligence claim dealt with on a "no win, no fee" basis when his solicitors argued that, by making a complaint about various delays, the client had had terminated the agreement and had to pay in full.  It is simply not the case that all "no win, no fee" cases end up neatly with a win or a loss.  Clients in our view need to properly understand what they might be letting themselves in for.  If that was understood we do not think any client would be willing to agree to payment of  such extraordinarily high rates.

Secondly - unless it is a "CFA lite" - no win no-fee agreements require the client to pay the difference between the full costs and the costs that have been recovered from the opponent. The rules as to costs that can recovered from an opponent when a client wins their case are complex. They usually restrict the recoverable costs to an amount that is "proportionate" to the value of the litigation and in most personal injury claims worth less than £25,000 they are at fixed amounts set by the court rules.

The higher the rates, the higher the likelihood that there will be a significant difference between the solicitor's bill and the recovered costs, with the shortfall between the two - subject to any contractual cap set by the solicitor - being deductible from any compensation or damages obtained for the client.

The average rate for junior staff members in our analysis (£326.97), which goes back over eight years, is nearly 2.6 times higher than the current guideline rate (for 2021) published by the Courts and Tribunals Service  for that level of fee earner outside of London.

Whether the rate set by the solicitors is more than the guideline rates is emphasised by a ruling of the Court of Appeal yesterday (6th April).  In Samsung Electronics v LG Display Lord Justice Males said -

"If a rate in excess of the guideline rate is to be charged to the paying party, a clear and compelling justification must be provided"

Any rate in your no win, no fee agreement that is higher than the guideline rates is likely to leave you with a shortfall to pay at the end of the case as well as any success fee.

Since 2013, following an overhaul of court rules and procedure, the vast majority of road traffic accident claims (along with accident at work claims and "public liability" accident claims - for example slipping when shopping in a supermarket) have been funnelled through the claims portal.

The portal is an online "dispute resolution" system - subject to  court rules and protocols - whereby the claim is entered electronically, the opposing party (usually an insurance company) responds electronically with an admission or denial of liability. Where liability is admitted the claimant, having obtained medical evidence - which is also driven by the portal - puts forward settlement proposals through the system, suggesting an amount of compensation and - following a short period of negotiation - that is either agreed and the claim resolved without any formal court involvement or, if it cannot be agreed, the claim goes to court simply for a decision as to  the amount of compensation.

It is only if liability for the accident is disputed, or if one of the parties does not follow the rules, that the claim exits the portal and proceeds through the traditional court process.

Claims that started in the portals account for 98.27% of the retainers analysed.

In all such cases the costs payable by the opponent are fixed by the court rules. You can see an example of how the fixed recoverable costs rules work in road traffic accident cases here. As the recoverable amounts are fixed, the hourly rates charged by the solicitors are all the more important.

If the recoverable costs are £500, a client who is being charged £540 per hour will inevitably face a higher deduction from their compensation than one who is being charged £90 per hour, because after the first hour there will already be a "shortfall".  The £90 per hour lawyer on the other hand can do 5 and a half hours before there is any possibility of a "shortfall" that would need to be met by the client.

But even a client who is being charged £90 per hour may face a higher deduction from their compensation than one who has been offered a "CFA Lite" (because under a CFA lite the solicitor accepts for their "hourly rate" charges whatever amount is recovered from the losing party, so there can never be a "shortfall" that needs to be paid by the client no matter how much time was said to have been spent).

How will such arrangements possibly operate successfully when the new portals, the extended fixed costs regimes (for litigation cases worth up to £100,000) and the "online court" arrive?

"After the Event Insurance" 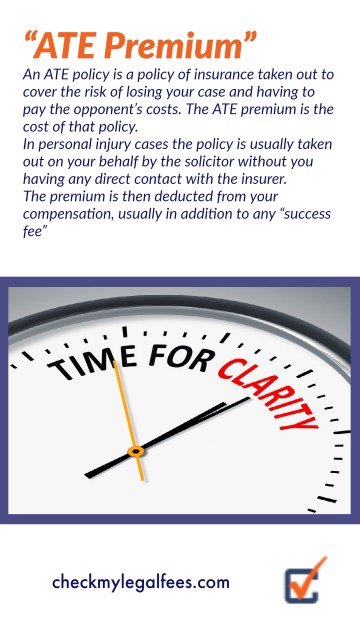 If clients are being sold insurance policies for an average cost of £231.60, to insure against a small risk of having to pay out an average of  £216.00, how is that not the worst insurance deal in history?

Full detail of the analysis is available below. Firstly in .pdf form, secondly as a .zip file which will extract into an Excel spread sheet

The .zip file was checked for viruses and malware immediately before uploading but, as with any compressed file we recommend you undertake your own checks after downloading.

Irwin Mitchell did not have consent for £28,000 deduction, court rules