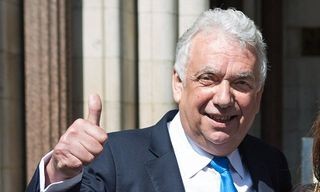 Claimant, Andy Erlam who succeeded in an order for delivery of a new bill for work done in 2015 and 2016

A breakthrough for our client, Andrew Erlam, yesterday in his fight for scrutiny by the Courts of the legal fees arising out of the High Court case which ousted Tower Hamlets mayor Lutfur Rahman's regime for election rigging.

Mr.Erlam and three other constituents issued an election petition against Mr. Lutfur Rahman, then the elected mayor of Tower Hamlets in June 2014 (as a result of their observations and concerns regarding suspected vote rigging in the May 2014 mayoral elections).  A five week trial was held  at the conclusion of which in April 2015 Mr. Rahman was found guilty of seven election offences and banned from public office. Mr. Rahman was ordered to pay the petitioner's costs, subject to assessment, and to make a payment on account of £250,000.

It was from that point that things went wrong. Of various assets in the form of property thought to be owned by Rahman, as a result of disputes raised by his wife, only one was ultimately seized despite a worldwide freezing injunction before Rahman declared himself bankrupt. The election petitioners are left with a property with a net worth of no more than £250k, and combined legal bills of some £1.1 million.

Richard Slade & Company had been instructed by the Petitioners after the Election Petition case to deal with the recovery of costs. When they were disinstructed in July 2016 they had sent bills totalling just under £237,000, which formed part of the overall costs now faced by Andy and the other Petitioners of some £1.1 million.

Mr.Erlam wanted to query the level of charges, however the bills were extremely confusing, and he believed that he was entitled to do so once the £250k had been realised from the sale of property, which has yet to happen.

We were instructed in late 2017 and proceedings were issued against Richard Slade & Company Plc seeking either assessment of the bills that had already been delivered, or (on the basis that the bills did not give the client sufficient information upon which to judge their reasonableness) an order that the solicitors deliver a new bill in a way that was fully compliant with the provisions of the Solicitors Act and the law that has built up around it.

The proceedings were resisted by Richard Slade & Company Plc, who argued that the bills were compliant with the relevant law, and that Mr.Erlam's application was out of time.

At a hearing yesterday District Judge Peter Bellamy sitting in the High Court in Sheffield ordered Richard Slade & Company Plc to deliver a new bill, and to pay costs of the proceedings totalling £12,000 to Mr.Erlam.

Mr.Erlam was represented by Counsel, Robin Dunne of Hardwicke.

Transparency and reasonableness amongst lawyers are crucial to maintain public confidence. Checkmylegalfees and barrister Robin Dunne have provided an outstanding service.

This is a major victory for transparency and fairness. Mr.Erlam and his fellow Petitioners took this case on not for personal gain, but to stand up for democracy - at a potentially ruinous personal cost. Last month the government rejected a plea by the Petitioners to help with their legal bills so they were very much on their own. They now, at least, have the comfort of knowing that, once the new bill is delivered, they will have an unfettered right under the Solicitors Act to have the court determine whether the bill is reasonable.

Similar proceedings that we have brought against one other firm of solicitors who became involved in this case after the Petition hearing are ongoing, along with enquiries into other legal fees charged to the Petitioners making up the balance of approximately £1.1 million.

Meanwhile Mr.Rahman, who was himself a solicitor, was struck off in December 2017 and appears to have been made bankrupt again for failing to pay costs of £86,400 due to the Solicitors Regulation Authority following his striking off.